SECOND UPDATE: I keep getting email about these door struts asking if they worked out. As I stated below in my first update I do not recommend the McMaster struts. So to be clear I did not use the McMaster struts and as noted later in the blog I finally just settled on the HD struts from Van's. It was a fun experiment and hopefully this post will save someone else time and money in case they try to do the same thing I did.

Van's Heavy Duty Strut 600 Newton (135lb) lifting force - $131 each
I found that Van's buys these struts from a company called Dean Lewis Associates who gets them from the manufacturer Stabilus. (2 middle men markups before I buy them and kind of expensive for gas struts)

After research on the forums others recommended getting the Stabilus part number 2218LP Lift-O-Mat Gas Strut. (I'm assuming it's the same part number offered from Van's) The forums recommended a company called JWF Technologies. They sell the part for $94 (cheaper than Van's) but with a 4-6 week lead time.

So I decided to see what other options I have. A McMaster Carr search using the dimensions of the 2218LP Stabilus Strut revealed two options that had a 130lb lifting force and the same dimensions. One of the options was made by a company called Bansbach and was Stainless Steel. McMaster was selling them for $57 each. The other option was made by a company called SUSPA and was a treated steel with the rod and tubes all black (that should look nice). I called and confirmed that the part was damped (the last 10mm are damped) which was important. The best part is that they were about $14 each!

I figured the $14 struts were worth the gamble. If they give out in a year it's no big loss and it's an easy upgrade to the Stabilus struts if need be.

The struts from McMaster need rod ends so I found some that matched the dimensions of the Stabilus rod ends (which are made from plastic by the way) and included those in my order. Oh and they will probably be at my door tomorrow, no lead time.

Here is my order with the part numbers from McMaster Carr a grand total of only $33 with the rod ends: 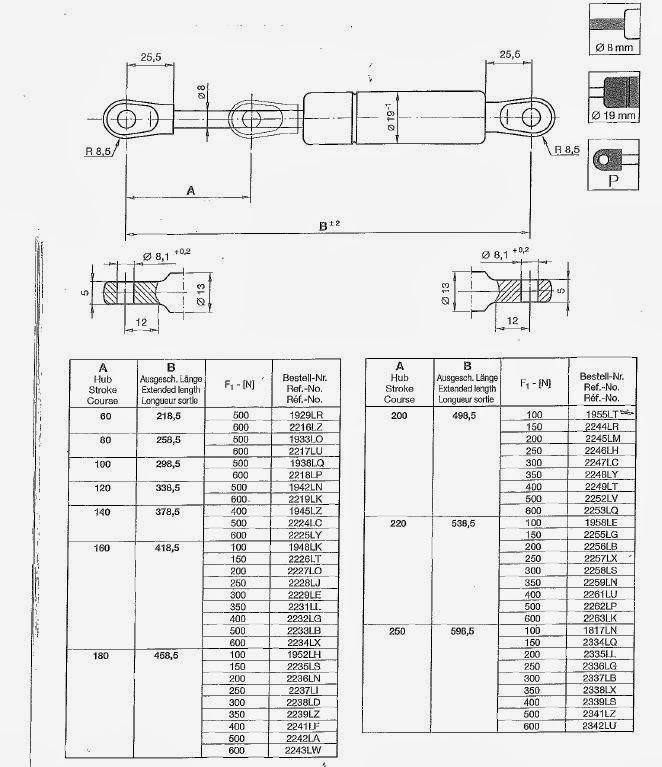 Posted by Justin Twilbeck at 3:10 PM