This is only the first step to making the overhead console. There will be multiple steps and parts that need to be made before this thing starts really looking like a finished product. So far it's been a lot of fun. I have some cool ideas for this overhead which is what finally drove me to making my own instead of ordering one. I often have a very specific thing I want something to do or have and when I can't find it on the market I make one. The "I'll just build it myself" decision is usually a very quick one for me to make and I make it often. Most of the time it's furniture..."they want how much for that?!! Wow I could make that for a fraction of the cost and it will last a lot longer! OK I'll just build it" Yep the decision happens that fast and I'm off sketching plans and buying hardwood. Well, the plane isn't any different. If a product is fairly priced and it would be laborious for me to make on my own I'll buy it and not think twice. The overhead though, I had something in mind, some exact details I wanted. Details I would see on the jets I used to work with. So the decision quickly became "I'll just build it" and, so far, it's been a lot of fun!

Wed 13 -1.5 hrs- removed cabin cover, drilled backup strips
Sat 16th -5.0 hrs- prepped cabin, cab-o-sil gaps, made foam mold and taped to cabin, spray foam filler
Sun 17th -5.0 hrs- started fiberglass for overhead console, two layers
(The times for Sat and Sun are estimates as I wasn't watching the clock. They also include a lot of planning and trial/error time that is normally not done in the shop.)

First I roughed up and cleaned the cabin cover and then filled in voids in the cover with West Systems Epoxy Resin with 205 Hardener and Cab-O-Sil Filler to thicken it up. After filling in voids in the cabin cover I made my mold for the console. The "mold" is made from foam insulation from Lowe's. It's tacked together with glue and then wrapped in tape so the fiberglass doesn't adhere to it. I also filled in the empty space of the forward door frame with spray foam. After the foam dried I cut it to the height of the rest of the structure and then cut out the area needed to install the visor mounts. 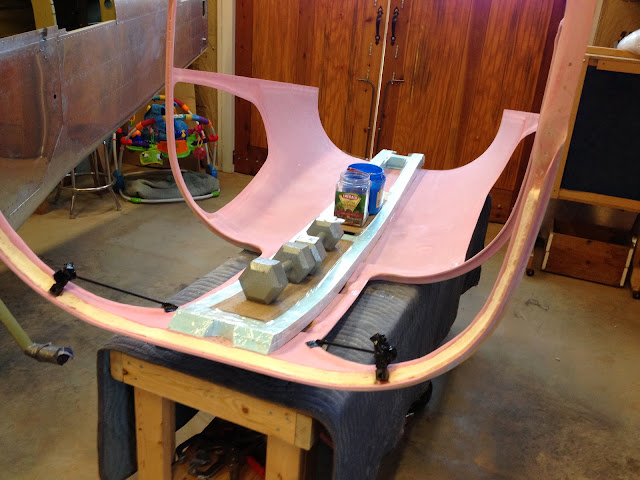 I then added a fillet of the filler mixture along the edge of the foam and coated and filled the empty/cut open cells of the foam. I then laid my first piece of fiberglass while everything was still tacky. 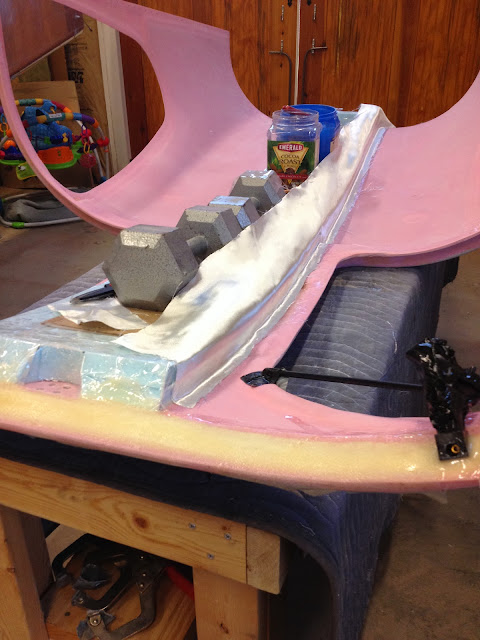 I put two layers on the overhead mold and one layer on the sprayed in foam. 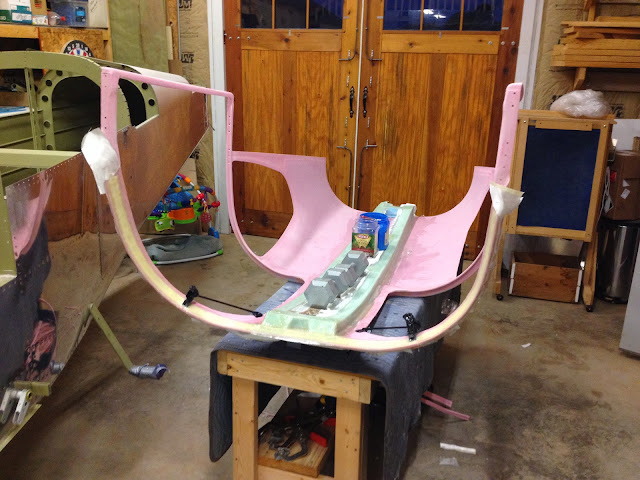 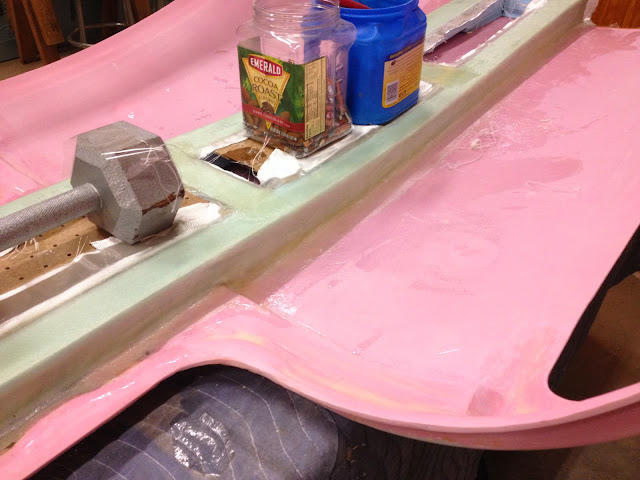 Posted by Justin Twilbeck at 2:50 PM No comments:

Finally the day has come to order the last kit of the RV-10. Of course I still need an engine, prop, hoses and such forward of the firewall, an interior, avionics....but this is the last part of the kit! So last week I emailed my request form into Van's and made it official. The kit should ship out in January.

I requested a kit packing list from Van's that contains a list of all the parts and pieces that come with the finishing kit. I needed this because I knew there were some parts I wanted to replace with nicer stuff. For instance I've heard the wheels and tires aren't the best and should be replaced among a few other things. I started digging into what I wanted to remove from the shipment when I thought I'd ask Ed what he was planning on removing from his shipment. I've mentioned Ed a few times in the blog. He's the guy up north that is at the same point in the build as I am and we tend to share notes. Anyway, he already generated a pretty comprehensive list of what to remove from the shipment and what to replace it with and I am shamelessly going to copy.

Fiberglass! I am actually excited to start fiberglass work. I was productive last weekend. I cut out the cabin top and then had the first test fit. I found a lot of places that needed additional trimming with the test fit. With the top back off I trimmed up the noted places of interference and then tried to fit the cabin again. This time it slid right into place, success. On Monday (holiday off from work) I started all the match drilling and countersinking into the fuselage. All in all, the whole process went a lot faster than what I thought and was much easier than what I expected. Actually, it was a lot like wood working but without worrying about wood grain.

I also did a lot of brain storming about my overhead console and how to do fiberglass work. I got a lot of good pointers from a buddy of mine that stopped by Sunday and Brandi pointed me in the right direction to the West System's Website and their products. Most of their products can be bought from Aircraft Spruce and you can do a lot of research and learning on their very informative website. Instead of forking over $1000 for the Aerosport console, which isn't exactly what I want anyway, I want to build my own overhead console. With an order of fiberglass and epoxy from Aircraft Spruce on it's way I hope to start this coming weekend. In addition to the overhead console the cabin cover is going to take a lot of work filling voids and shaping the structure to actually look decent, but I'm ready to get started.


Marking the places to cut. The existing scribe lines are hard to see and usually not straight. 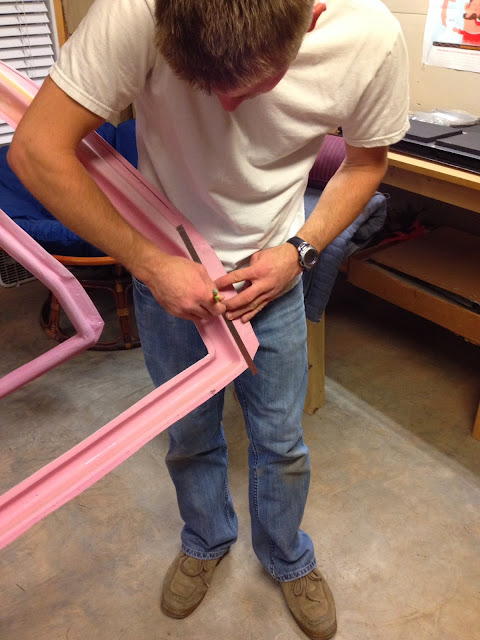 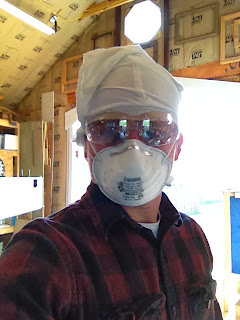 Going into battle with fiberglass gear on.

The cabin top trimmed and ready for test fit. 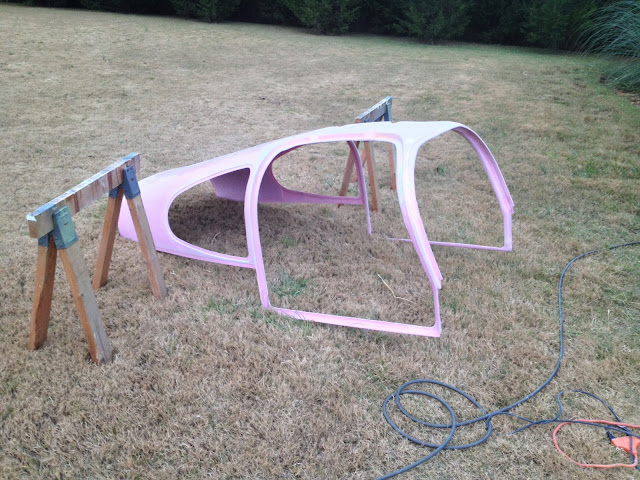 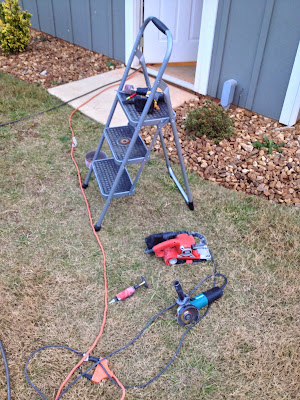 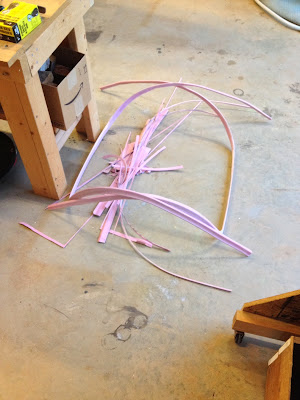 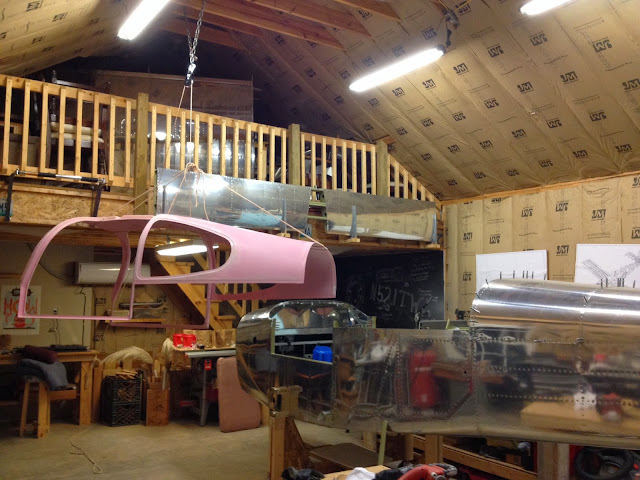 The cabin top trimmed and in place.....looking even more like an airplane! 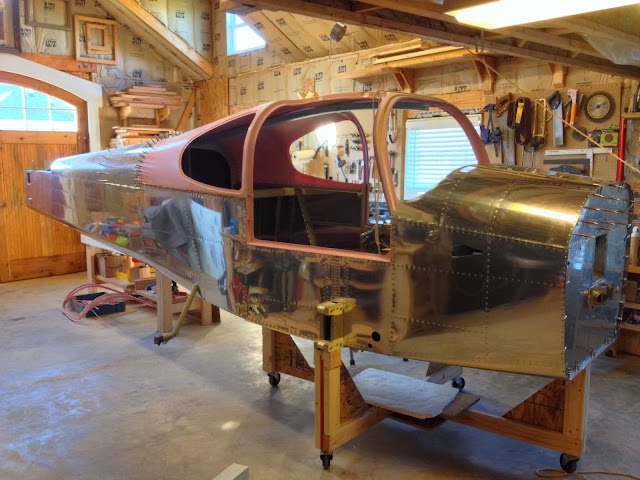 Match drilling to the fuselage and countersinking holes. I used all the normal tools here, nothing special. 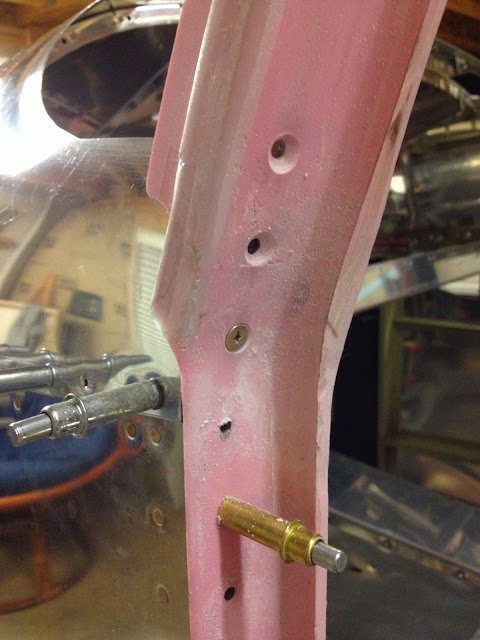 I drilled the attach holes for the center post. 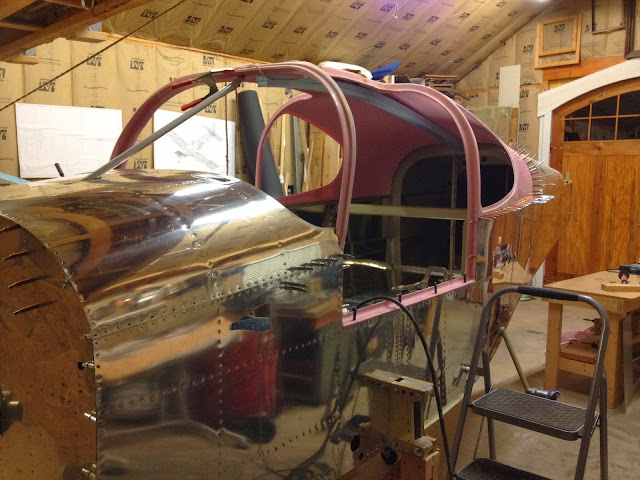 Posted by Justin Twilbeck at 4:02 PM No comments:

I have a lot of things going on right now so working on the plane has moved to the back burner. Building slowed to a near halt and I haven't gotten much completed. And if I don't complete much there isn't anything to write about, and this leads to a lack of posts. I did round up several consecutive hours last Sunday and finished the Upper Forward Fuselage Assembly. I had postponed building this part until I finalized my plan for the instrument panel and all the avionics installing behind it. Once I had the plan I felt comfortable finishing up this section. I hope to get back into the swing of things soon. I have another long weekend coming up, so hopefully I can make some good headway then.

I borrowed this tool from one of our mechanics at work. I would say something like this is a requirement when installing the nutplates for the rear seat closeout panels. 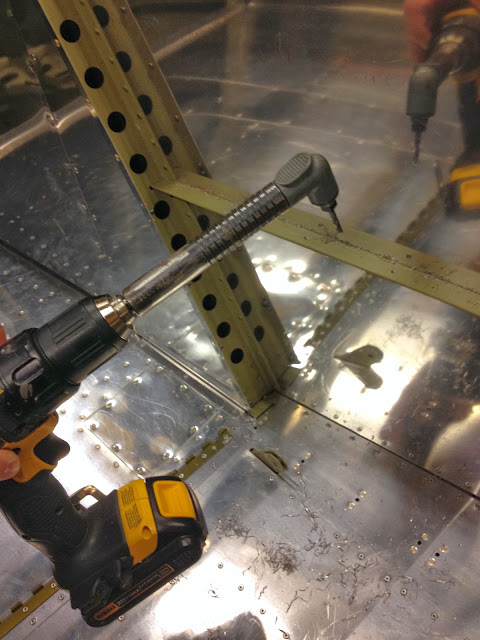 Upper Forward Fuselage clecoed in place ready to drill out the holes. 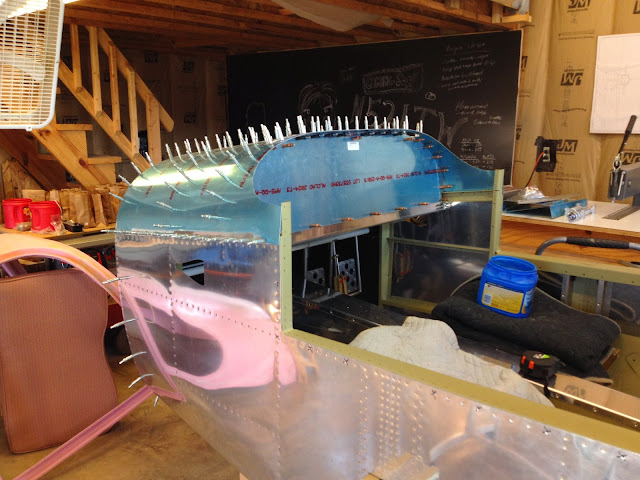 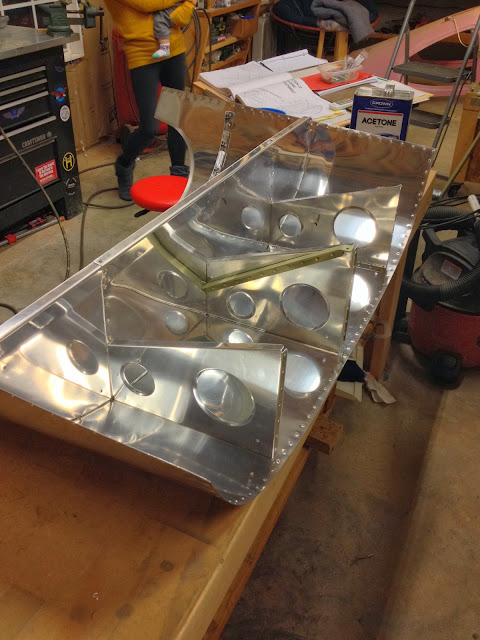 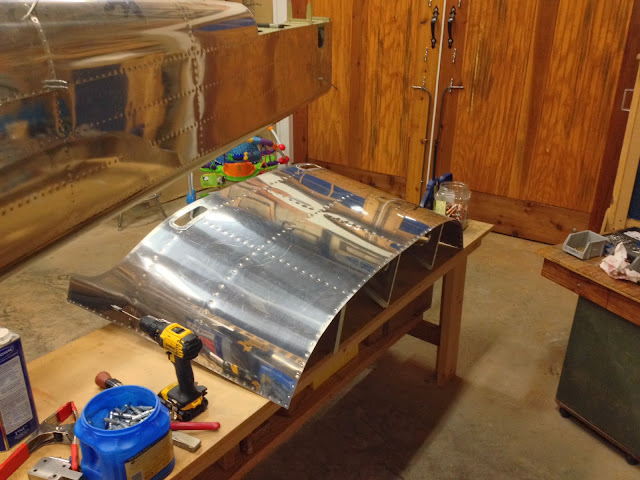 My helper reading the plans. 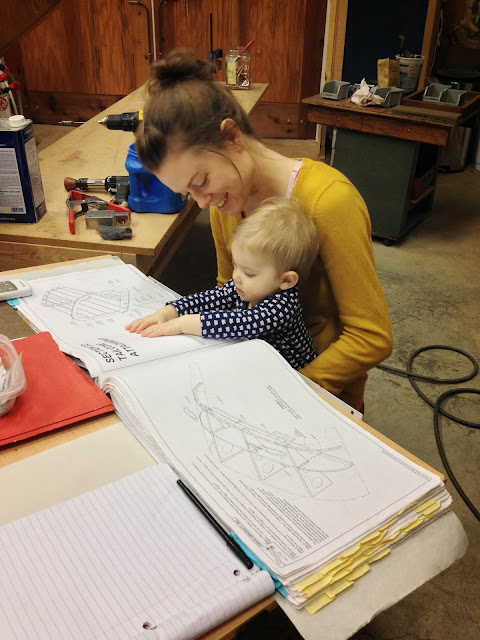 Posted by Justin Twilbeck at 2:38 PM No comments: