Continuing to catch up on the posts so I'll just let the pics go through everything.

As you can see the cowlings don't line up very well from the factory. The whole section is really just about getting them cut to size and having everything match up in the end. The instructions seemed to do things backwards then the way I thought you'd do them. So after thinking things through I decided to just approach cutting and fitting these like a wood working project. After I got in that mindset things went really well. 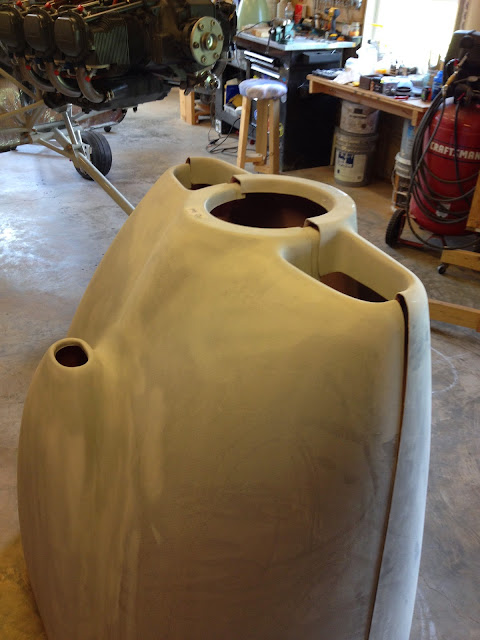 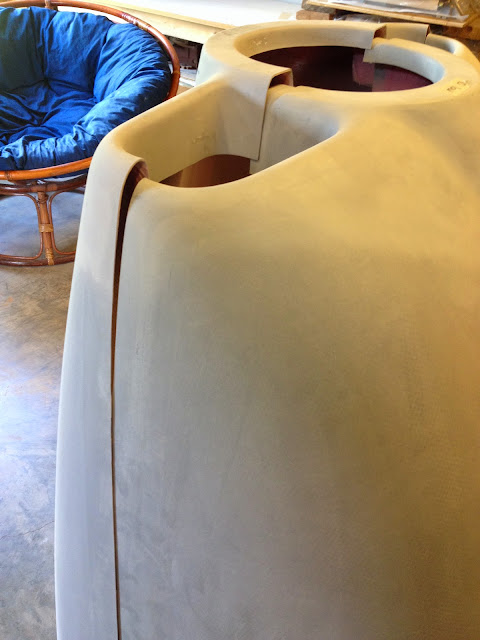 One thing I should note is that I made the cut out in the lower cowling for the front landing gear leg much wider than what the plans call for. The plans dimension is so tight I couldn't even install the cowling over the landing gear. So I increased it by (I think) about 0.75".

So I couldn't use the table saw to make a nice straight cut like I would for building furniture, so I broke out the laser level to mark a straight line from the ridges of the inner circle to the outboard edges of the cowling openings. I used the ridges as a guide to know when I had the cowling level. I then trimmed down the outboard inlets flush to the lines that were made from the laser level leaving the sides sticking up to be cut later. 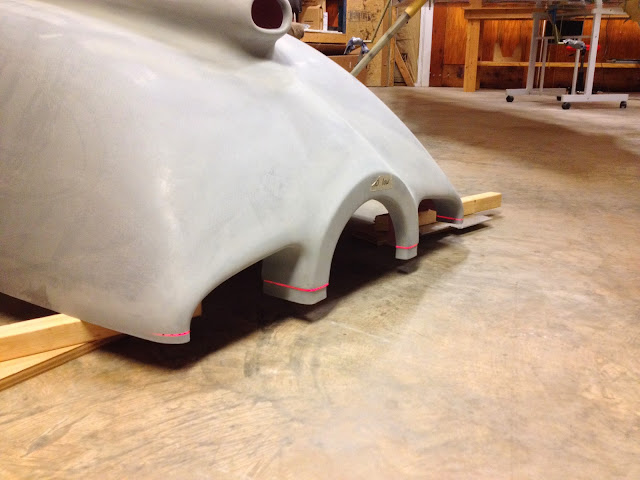 With the front edge cut the two halves of the cowl could rest against each other and I was able to tape them up into place. First I taped up the bottom cowl and got it into place. I used some spacers up front against the spinner and then just duct taped the cowling to the engine to suspend it in place. The aft part of the cowling rested against fuselage skin.I then used an edge finder, just like I did with the doors, to mark the edge of the fuselage onto the cowling. I then cut the cowling along the line and re-installed it with a few clecoes into the hinge to hold it in place. I re-taped in place in front around the spinner with spacer blocks. I then repeated the process for the upper cowling and after I cut it I placed it in position. The pic below shows how well the fuselage and upper cowl lined up. I wound up increasing the clearance between the fuselage and cowlings all the way around to about 0.10" or so. 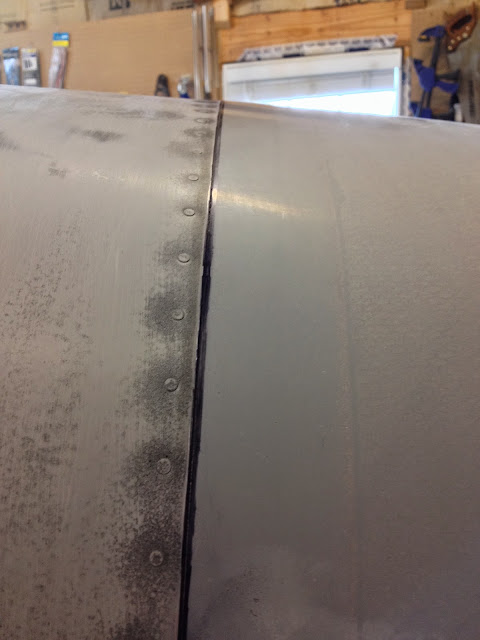 With the cowlings clecoed in place along their hinges the upper cowl side overlapped the lower cowl. I made a straight line mark using a chalk line positioned at the leading edge joint and the aft edge point. You can see how the upper cowling was not perfectly straight. 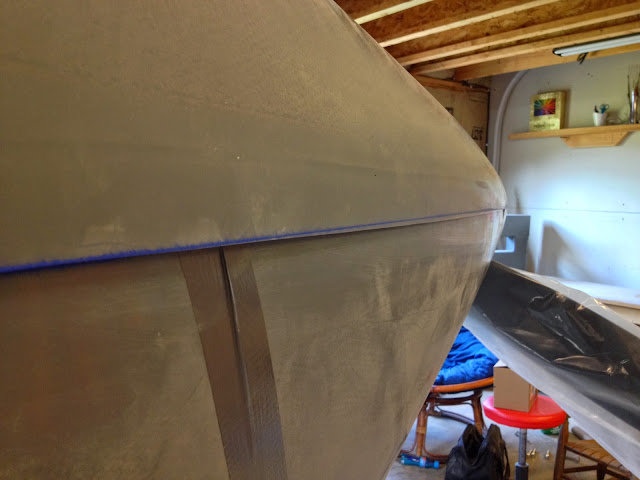 The entire time I had a chunk of scrap wood that was the right in the middle of the clearance tolerances listed in the instructions. I had a large piece spanning the upper joint and several tapped in position (as shown in the picture) around the lower opening. You can also see how the cowling sits just below spinner. I've heard you want to have this because the engine "settles" in place and will drop a bit. 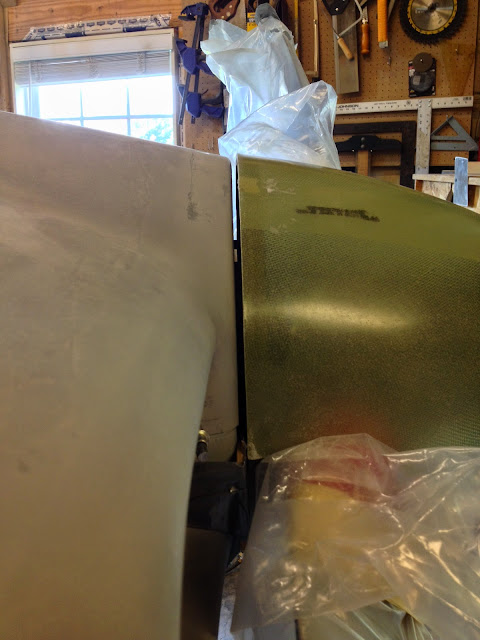 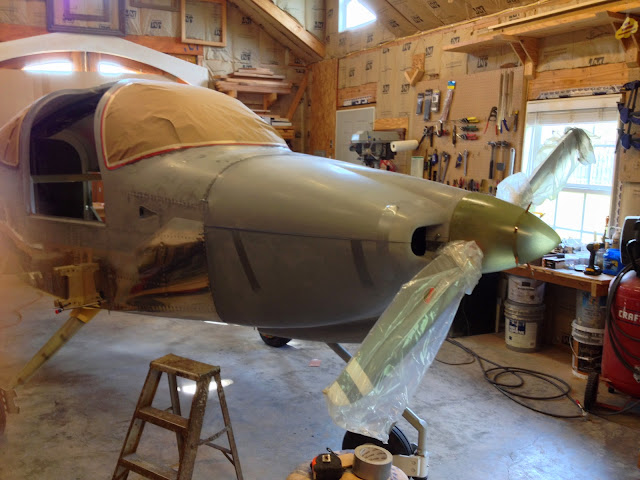 With the two halves cut and sanded I had zero clearance between the two halves. So I had to remove the upper half a few times and sand it down just to create some kind of gap between the two. I then installed the horizontal hinges per the plans except a bit shorter to accommodate the Aerosport Pin Covers. 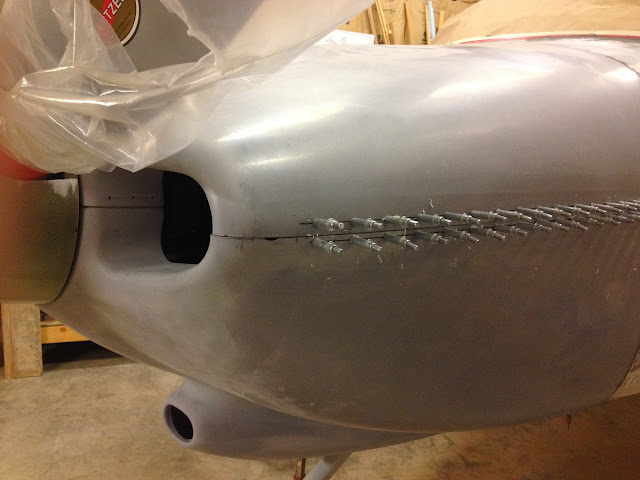 Everything lines up pretty well. The only thing I need to do now is some body work around the openings. 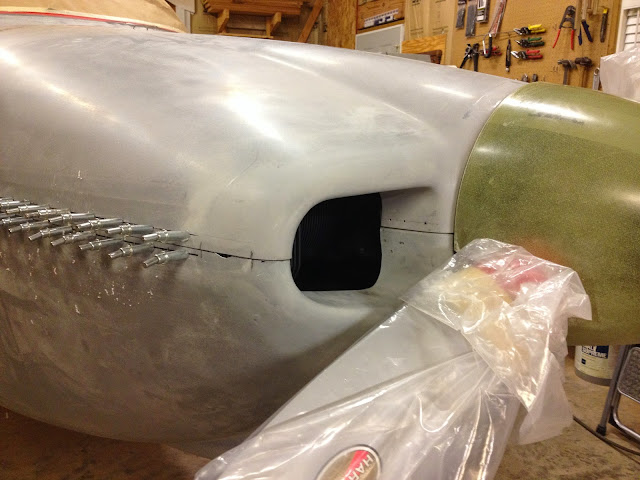 Posted by Justin Twilbeck at 2:32 PM